You’re at the local shelter, ready to adopt a new best friend. As you walk through the cages, you come across two adorable puppies, the only ones left from their litter. Soon you’re laughing at their antics as they bounce around playing together.

“How perfect,” you think. “I’ll adopt both of them so they can keep each other company as they grow up together.”

Not so fast. Many rescue professionals, dog behavior experts and trainers agree it’s a mistake to adopt a pair of puppies from the same litter. The reason: The close bond between canine littermates can prevent them from learning how to interact with their human family or other dogs.

As noted animal behaviorist Patricia McConnell writes, “It seems harder to get their attention, harder to teach them emotional control, and harder to teach them boundaries. I imagine that we humans become more like party poopers that interfere in their fun with their playmates, not to mention that we are more tiring, because they have to learn a foreign language in order to communicate with us.”

How do you know if you’re looking at double trouble? Some signs of littermate syndrome include:

What if you’ve already adopted or are fostering a pair of littermates? Experts agree your main goal should be to keep the puppies from developing a high degree of emotional dependence on each other. Here are some tips to help: 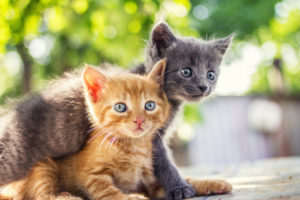 While dog lovers should heed concerns about adopting littermates, the same is not true for cat fanciers. “In fact, the exact opposite is true for kittens,” said Melanie Corwin, My Furry Valentine’s team lead for rescues and shelters. “Many responsible rescue groups only adopt kittens in pairs because they need the emotional and physical support they receive from their littermate. Kittens bond so much during the first eight weeks, and it is harder to get them to like cats that are not related.”

In a study conducted in 1998, John Bradshaw and Suzanne L. Hall observed 14 pairs of littermates that had lived together since birth and 11 pairs of unrelated individuals that were not brought together until at least one of each pair was over 1 year of age. The results:

Whether your preference is for dogs or cats, be sure you consider the pros and cons before bringing littermates into your home.